Do you like picture-heavy posts? Good. There are 62 in this one. But I made them into collages, so I only had to upload 12.

I'm not just a pretty face.

So, after a short drive south from Rochester, we arrived at our sister-in-law's family farm and headed straight for the pond. As soon as we got there, the boys jumped out of the van to find their cousins, who they hadn't seen in over four years. The last time we saw them face-to-face (other than Skype calls) was when Liam was five, Simon was only 18 months, and I was three months pregnant with Andrew. So neither Andrew or Eloise had met them, and we'd yet to meet little Cora. After a brief, somewhat awkward, arm-around-the shoulder hug, they were off together... having found that thing over which all boys can bond... Lego. (Let's pretend I imported this into photoshop to add some text over that grey square, ok?)

The three-and-under set aren't always included in the big boy play. Thankfully there were many distractions and much fun to be had apart for the tiny plastic men. I can't imagine where Andrew learns to make all his faces... The afternoon we arrived was also the birthday party of the son of Susanna's (our sister-in-law) cousin. So, it was the birthday of my husband's brother's wife's cousin's son. Follow? They were gracious enough to include us in the scavenger hunt, games, cake, etc. One of the games involved cups with holes and water that had to be moved from one bucket to another.

There was a bit of a mishap (I don't even remember what happened), but nothing that hugs from mom couldn't fix. Even hugs with a camera in ones face.

When not playing Lego, swimming, swinging, playing shuffle board, fishing or digging in the sand, THIS was often happening.

There are two large plastic dump trucks at pond and someone came up with the idea of riding them down the big hill. I thought it was a joke when someone first suggested it. Nope. They really do it. Simon, especially, loved it.

But enough with the boys.

How about this cuteness below? And a view of the beautiful pond?

I was worried that Andrew would feel left out, with the Toby/Liam and Asher/Simon combos clearly established. But he didn't seem to. He loved swimming with anyone who was in the water, and played in the sand whether the other boys were or not. His back was pretty tan by the end of the week from being bent over in the sand pit so often.

These next pictures are of our sweet little niece, Cora. She's two years old and it still makes me shake my head that we didn't get to meet her until this summer. Her family living in California and our in Bogota/Ottawa makes getting together a big challenge. I'm sure if we lived near each other, she and Eloise would be great little friends.

I just love how she's holding her dress up in the first picture.

And just a few more of Andrew that I couldn't not share. He's generally a pretty good sport about having my camera in his face so often. And even when he is being a bit difficult, he's still cute. I love that he's still wearing all his bracelets from the market in Colombia, even after a year.

I'd say 62 pictures is a not-too-bad start to sharing our time at the pond. It really was such a treat to be there. More to come!
Posted by Amy at 5:57 PM 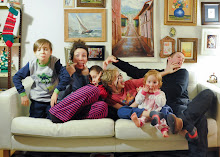